Well, that was unexpected: the team behind The Microsoft product family of Visual Studio have announced that a new version will be released this year! Seeing as we tend to upgrade our version of TFS in December, there goes my hopes of a quiet Christmas. This post is going to explore the change in the cadence of releases from the ALM Team at Microsoft and discuss some of the features that have piqued my interest, and my frustrations at the lack of info surrounding the most significant changes at the tail end of the LifeCycle. I'm also going to do a short demo of one of the features that was switched on when the announcement was made for TFS 2013.

When Update 2 was released back in April Microsoft spoke of a new “cadence” with their release cycles, They then plan to follow this up with a very quick release for Update 3, which is modest in terms of features; moreover, a tidy up of the features released in Update 2. Though certainly no one expected them to drop a new version within the following 7 months. However, this shouldn't be too much a of a surprise though as in the past 9 months, the team have been working hard on delivering new features:

The summary from this post also mentioned that this is how Brian saw the cadence back then:

So, when is it ready to ship? There's no announcement of a release date. I conject that we should anticipate it to be right at the end of the year as when I watched the videos from TechEd they discussed some features pretty in depth, whilst others they barely touched. And frustratingly, as a DevOps guy, the features they barely touched were the features I was most interested in! One such example is the InRelease tooling. InRelease is a tool purchased by Microsoft from InCycleSoftware which integrates into TFS. Using Workflow it aims to automate releases into production as well as other environments. In the TechEd 2013 session they spent all of 30 seconds demoing it, and aside from the fact that the purchase was announced on the same day as TechEd, I got the feeling that the ink was still drying on the contract to purchase this software. However, Build 2013 is a few days away, and so we should expect many more demos and announcements then. In fact if you read the info about Cloud Load Testing (more later) in the feature release for Team Foundation Service dated 3rd June, you will note that it says that the cloud load testing feature will be usable “once you download and install the VS 2013 Preview available at the Build conference.” So we can be ready to download something this week.

Broadly, TFS 2013 aims to tackle the Application Lifecycle Model by augmenting the current process to enable a more rapid iteration of Build-Measure-Learn. The features released in VS 2013 to achieve this are split into 4 main sections, Plan, Develop, Release and Operate. 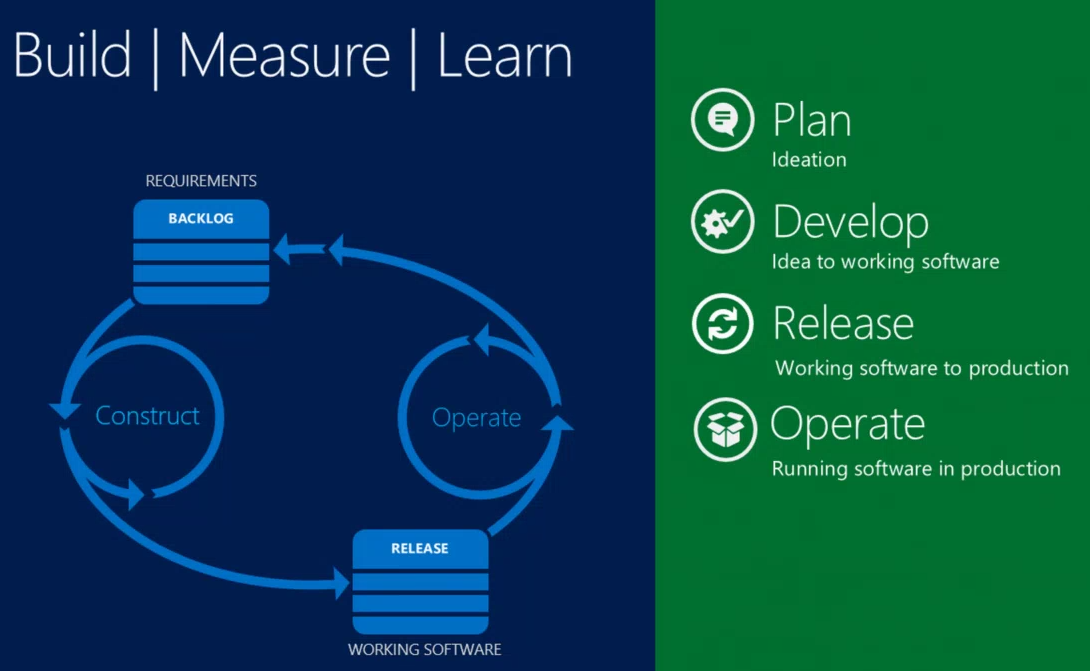 Probably the biggest feature announced was the new pop-out windows for Pending Changes! The team came under a lot of criticism for a change that a lot of people disagreed with. To be fair to Microsoft their is a User-Voice website where you can air your grievances publicly and receive votes. Such a request to bring back the old window was made and subsequently Microsoft have acquiesced. In fact if you watch the video from Tech Ed the announcement even got a standing O! (OK, maybe I exaggerate, but the demo did receive a smattering of applause). 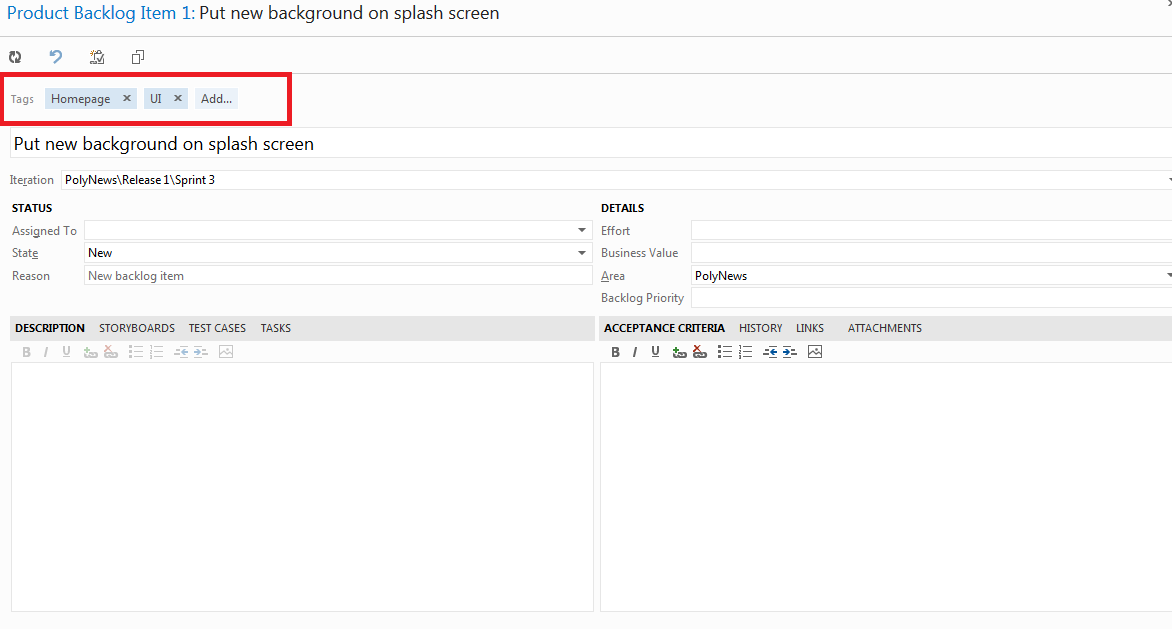 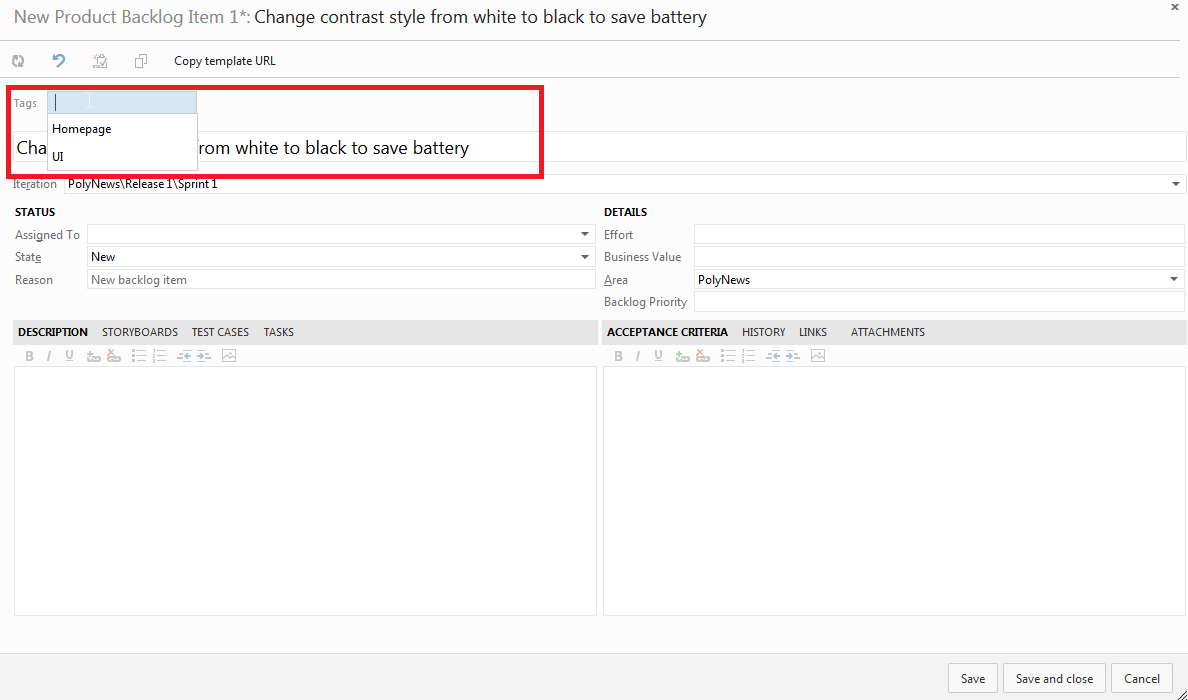 If you use the filter on the backlog page, you can filter by tag…

What I love most about this is that it is a feature that is not on the process template, so TFS admins don't have to make changes or edit XML every time we want to upgrade. This will also please the business as they'll be able to arbitrarily tag PBI's the way they want to.

OK, not announced on the same day, but Microsoft intend for backwards compatibility with different project types. Rather like BIDS 2012 you can open up older version of projects in 2013 and still be able to open them in 2012, and even 2010. This processed Microsoft have coined as Round Tripping. As mentioned in the article, this feature is a necessity of the increased cadence. Also note that there might be a few exceptions where one-way migration is the only option available. So to summarize: yes some projects we can Round Trip, some projects won't. Kind of like how we have it now!

It certainly surprised me that we're going to see a new release so closely after the last release. Clearly using Azure and getting features out there and people testing them has been a success otherwise Microsoft would not be releasing so closely; it's not as if VS 2012 has failed. We have been using it since January, and what with VS 2012 BIDs being released so closely afterward shows how much faster we should anticipate Microsoft releasing new versions. Let's just hope that they get it right with upgrading the servers on premises, and smarter upgrade paths for Process Templates and Build Workflow templates.