This week has been the week of the release: We’ve had the Visual Studio 2013 Preview and now the SQL Server 2014 CTP1. And that’s just the ones I’m focusing on! There’s the Windows 8.1 Preview as well as Windows Server 2012 R2. What with all the keynotes from Build and both TechEd’s this month, it is clear that Microsoft have certainly accelerated the release cycle and embraced a cloud-first development model. For me this is most noticeable in Team Foundation Services, the Azure based Source Control solution. Features were turned on regularly before they were released in the three updates we’ve had since the release of TFS 2012 back in August. This is a big change from the Microsoft’s previous strategy of developing for its products hosted on the premises first and then being pushed to them to the cloud afterwards.

At a later date I’ll dig more into features of SQL 2014, as this week my focus has been on Visual Studio 2013, which is out sometime this year, as well as doing my job in real life. The duties of blogging…

For those of you already ahead of me, Brent Ozar has posted the New DMVs in SQL Server 2014 CTP1. Brent also wrote an incredibly in-depth article entitled almost everything you need to know on SQL Server 2014. I’m not going to provide link to that one because if you’re a SQL guy and don’t read Brent’s blog then shame on you!

Also, if you’re looking for BI development support, you need to read this article here. (TL;DR, there isn’t any).

Reading the the high level SQL Server 2014 overview, you can get a pretty good idea as to what has been addressed in this release:

The marquee features in this release is the In-Memory solution. bWin have been early adopters, as have EdgeNet. 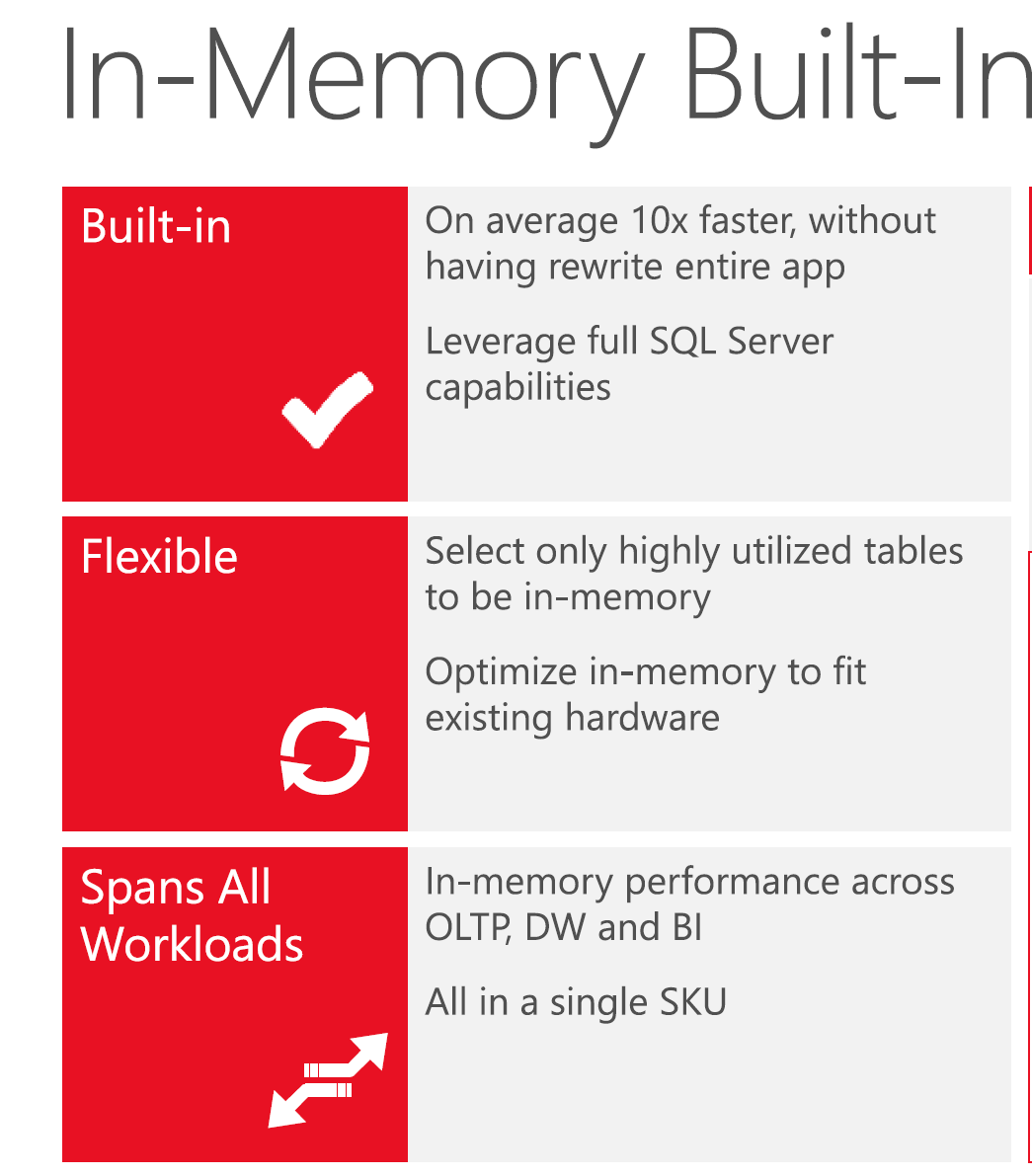 This graph shows how price of Memory has dropped; hey, it may be true, but that jump at the end there is where we are now. When you purchase RAM it’s in GB, so that jump is more noticeable. And considering the limits on SQL Server Standard imposed by Microsoft (64GB RAM), they should also be honest here and show the cost for SQL Server over the past few years. That whole $7k per core to get more than 64GB overshadows any price rise for memory! When 64GB was set as the upper limit, it seemed reasonable, but now that limit is out of date. Doubling it would be welcomed by those who don’t have deep pockets. 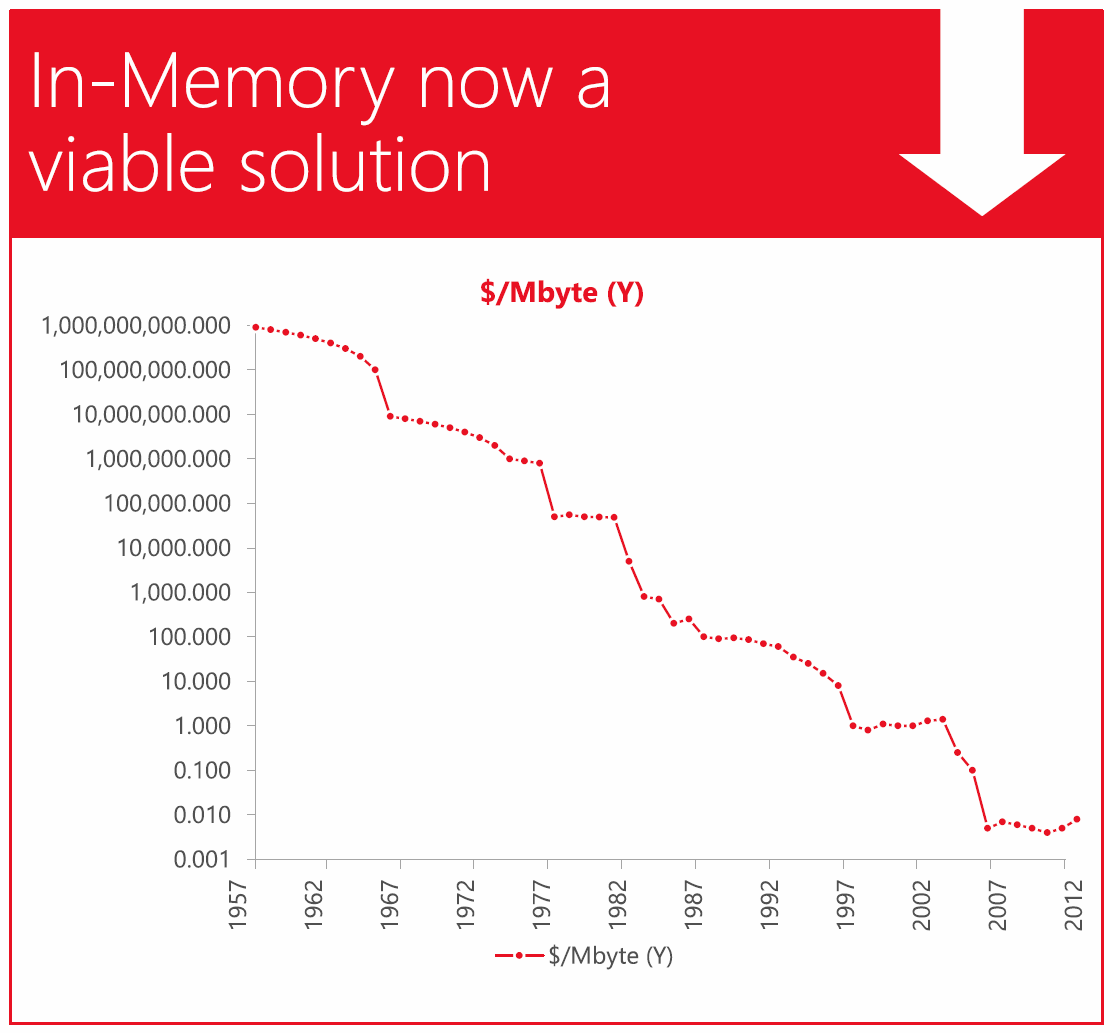 They’re also pushing how SQL Server is scalable, in terms of Scale Up and Scale Out, further pushing the idea of a Hybrid Cloud. 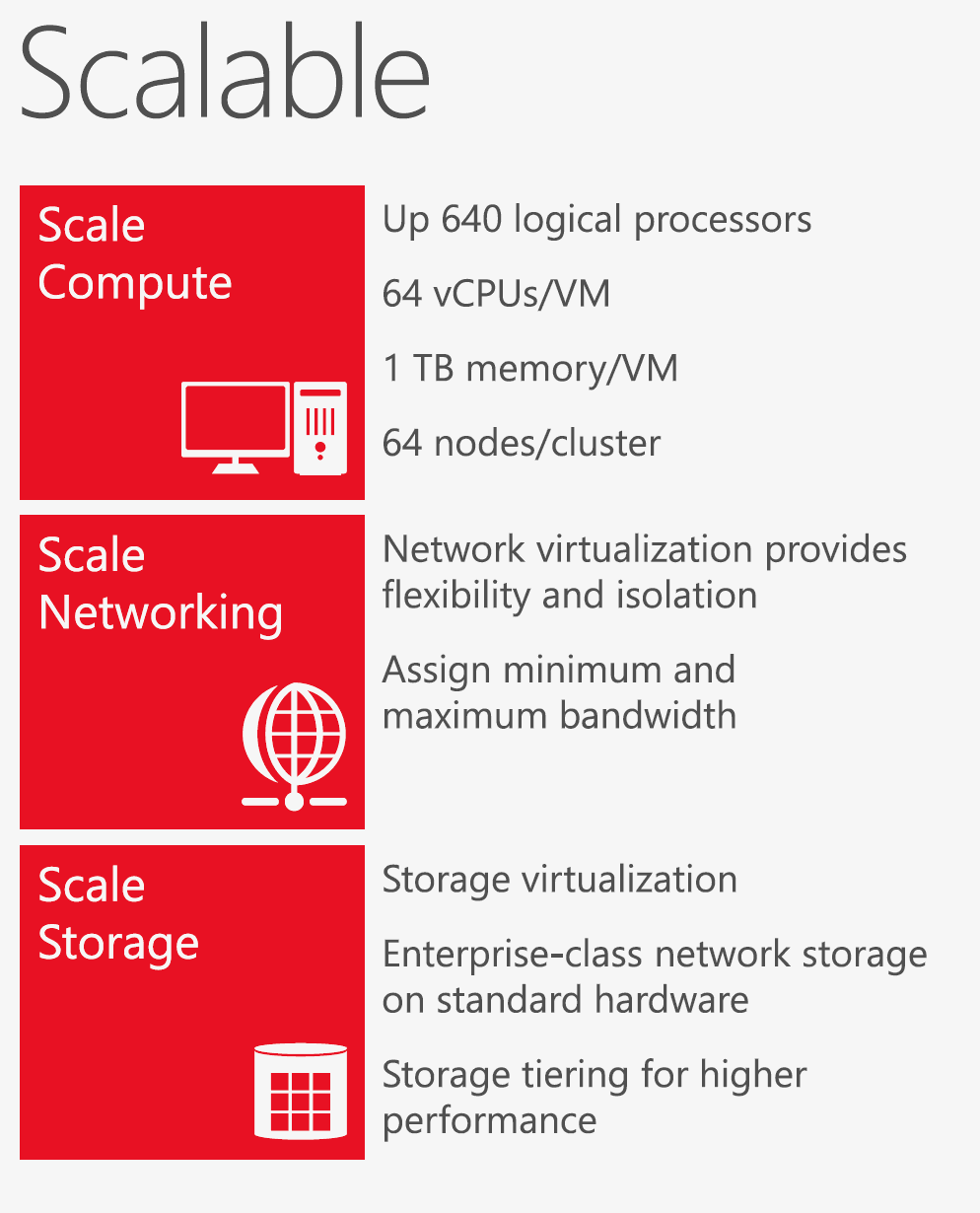 Some of these limits are imposed at the OS level more than anything else. I’ve also said it before, but I’d love to see them increase the number of partitions again, just so that I don’t need to maintain them. Or, even better, SQL gets better at partition management.

w/r/t Any Data, Microsoft are keen to express that there are multiple ways to extract the data stored into SQL: 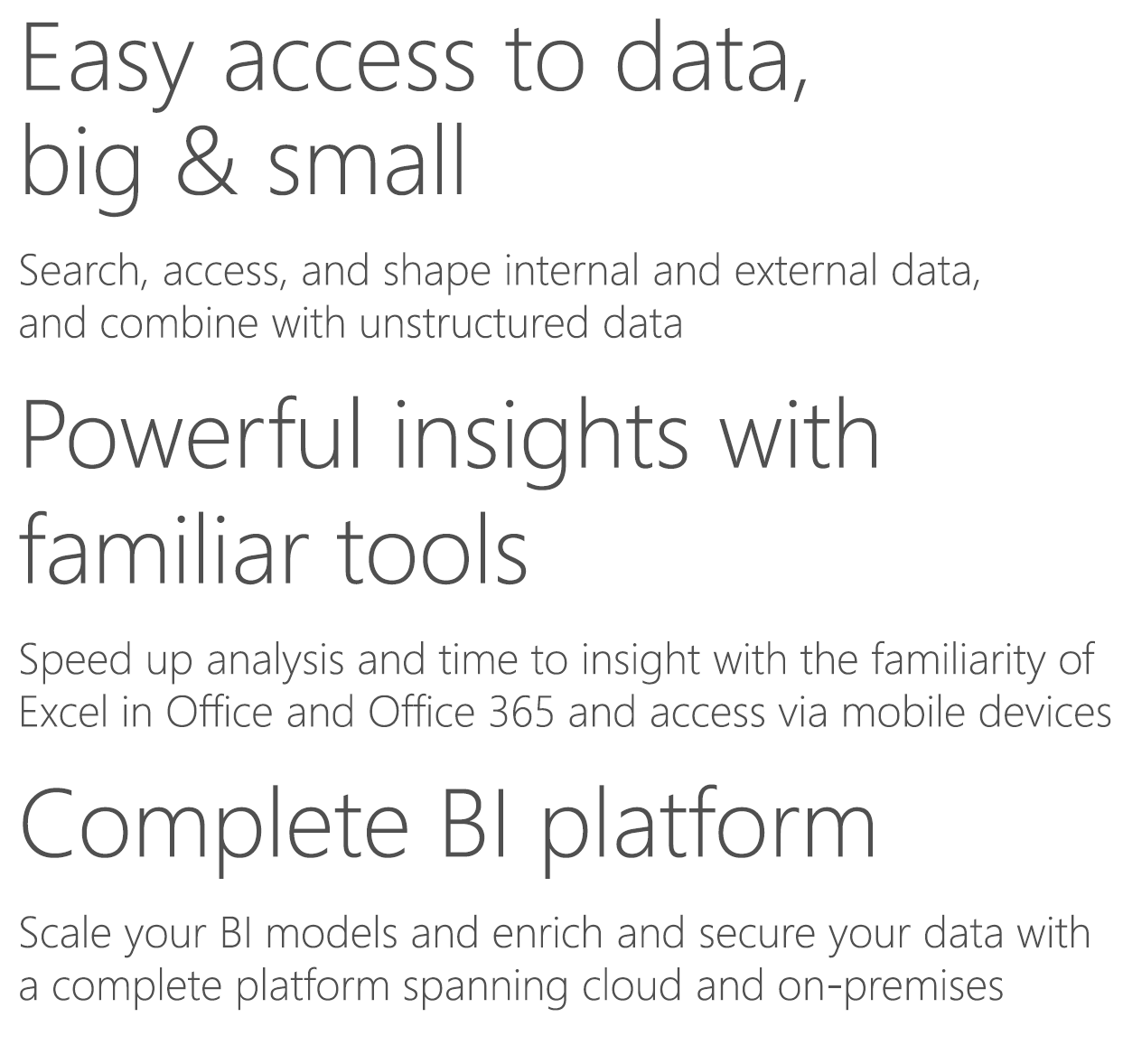 Finally, these last two slides give a holistic overview of how Microsoft envisage the ecosystem of a Microsoft Partner: 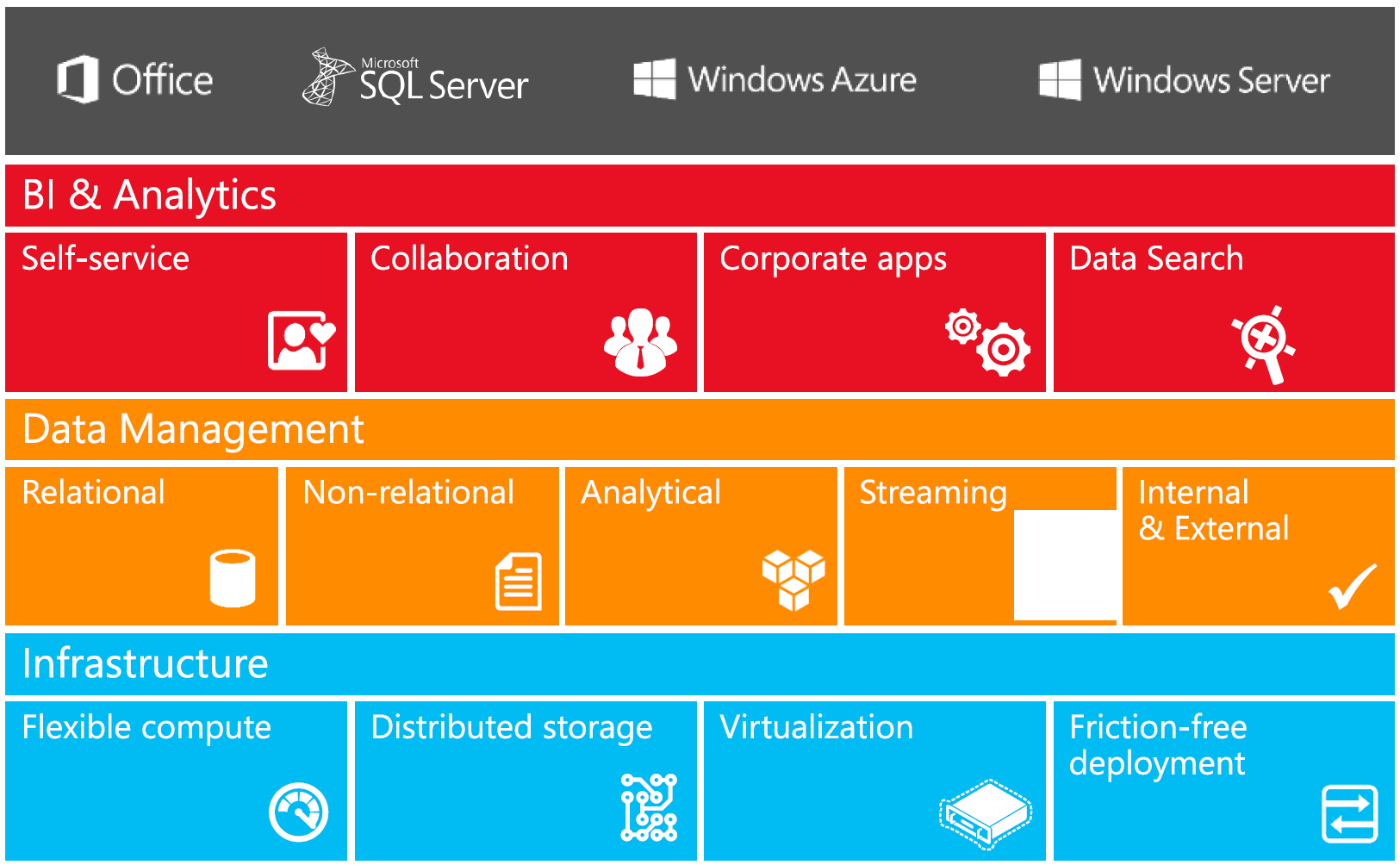 And also how the public/private cloud integrate into the Hybrid Cloud: